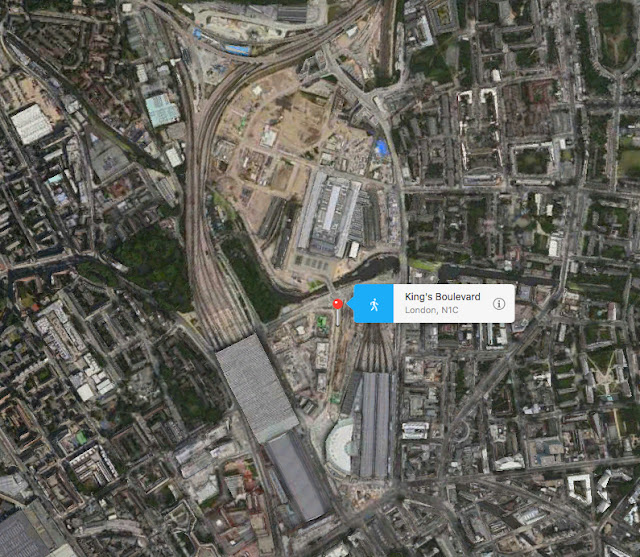 Kate Corder invites you to take part in a late autumn King’s Cross Walk
at 14:00 on Wednesday 30th November 2016

Using Apple’s Maps app and Google Maps one can observe that satellite images of King’s Cross (London) are yet to be updated to a current view. The map images show an area in early stages of renovation where extended sites are experiencing bulldozing and deconstruction before reconstruction and manipulation by corporate powers takes place. In a transformation process teams of workers are deployed transplanting materials gleaned from other sites to assemble and create other visions. The satellite map images are historic in their observation, because the built environment changes through human labour on an everyday basis. The darkness of dereliction alters. Sites are conjured, as if by magic, in to regenerative usefulness. This new usefulness seeks to cloud memories of dance raves in warehouses of a bygone era, but memories linger as unseen and are sensed.

The fabricated aggregation of the site diminishes as accumulated materials settle. When we are in the site everyday life surrounds us with presence and the archival map images are seen on device screens for us to compare with the here and now.

We will meet at the big Oak Tree on King’s Boulevard at 14:00. The Oak was uprooted and travelled from Germany to be replanted here. At 14:15 (allowing for latecomers) we will stroll up the Boulevard observing its stuck down river of gravel*. We will walk down Goods Way observing the Plant Wall and on up to Camley Street Natural Park**. From here we will walk to St Pancras Gardens and observe the Old Church situated in the grounds and the back of St Pancras Hospital. Then we will walk up Camley Street, across the canal to the Regent’s Canal Towpath and walk to King’s Cross Coal Sheds***, and then on to the Lewis Cubitt Park beyond observing all the while materials used to construct the place. The Walk returns, finishing back at the Granary Building at approximately 16:30.

*The gravel is an aggregate material possibly mined by London Concrete at Sipson (a village experiencing hostility through on-going threats of Heathrow Airport expansion). During glacial melt deep layers of gravels were deposited on riverbeds in the Heathrow region. Over a large flat area the rivers silt accumulated above the gravel producing fertile soil, which has been used by humans for agricultural land and airline travel amongst other things.

**Camley Street Natural Park is a community garden existing since 1984 and run by London Wildlife Trust. The Park is an inspiration for the plants used in King’s Cross renovation.

***The Coal Sheds are currently being converted in to a shopping arcade.