COMPOSTING ESTATE
A series of seminars examining processes and materials of composition and decomposition of site and place.
Room A002 Central Saint Martins
10.30am  – 1.00pm
24 January 2020


·
Pat Naldi
Who Owns the Sea? 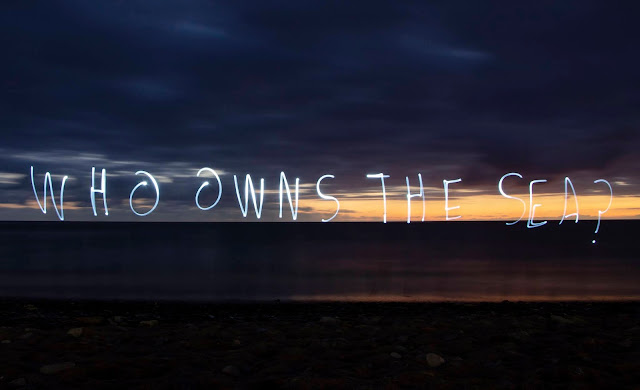 Who Owns the Sea? is the second in a trilogy of projects that investigate territorial ownership, and its political, societal and psychological impact by and for humans. The first in the trilogy, the video work Who Owns the Land? (2016) takes as its starting point the ad coelum doctrine - a principle of property law in the UK. Originating in the 13th century, this ancient law proclaims the extent of land ownership beyond that of the surface. Although now acceptable in a limited form, real property/estate encompasses airspace, wild animals, trees, plants, flowers, water, mines and minerals above, on, and below the surface of the land. The video work probes land ownership and its societal consequences on public rights, ecological systems, power, and value. Filmed on location across the high moorland and fell landscape of Northumberland and Cumbria (UK), on land surface, horizon, and below ground in disused lead mines, this work, with a view to make transparent the UK’s most valuable asset, asks: Who owns the land? Who owns the ground below? Who owns the sky above?

The second in the trilogy of projects Who Owns the Sea? (the third will be Who Owns the Sky?), has in its early stages of research been informed and influenced by the territorial waters surrounding Gibraltar a politically contested British Overseas Territory located at the southernmost tip of the Iberian Peninsula. A highly contested stretch of sea since the Treaty of Utrecht in 1713, and a near daily site of military, and police incursions resulting in political bickering, these waters are continuously shrinking due to the land reclamation undertaken by both Gibraltar and Algeciras in Spain. Future research and production of a strand of Who Owns the Sea? will be sited on the Arctic Ocean. Acting as ground zero in climate change, the focus of the research will question, explore and address the critical environmental, political, and human impact of sea ownership as experienced through the decreasing Arctic sea ice cap, and its effect on ecosystems, weather patterns, and territorial waters. The Arctic sea ice cover which helps determine the Earth’s climate, fell to its second lowest level in 2019. Humanity is dependent on the ocean and cryosphere. It interconnects with the climate system through water, energy, and carbon. The impact of this melting ice cover is also political, military, and most of all economic as several nations vie for ownership and control over its greater navigable waters – a new Northwest Passage – and the opportunities this will present. Who Owns the Sea? will address these global implications through the local. The research and production expedition to the Arctic Ocean is scheduled for June 2021.

Pat Naldi is a lecturer in MA Contemporary Photography; Practices and Philosophies at Central Saint Martins.


For the approaching estates seminar series I presented Assembly at Brick Lane Mosque, a site-specific performance comprising of a 1:1 scaled moving floor projection with surround sound. Assembly used site-integrity as a working methodology - a particular but original mode of site-specific practice that potentiates a dynamic exchange between site, artist, device and audience. Site-integrity repositions the act of representation from its retrospective or projective dimensions towards that which is performed and is experiential. Assembly was made respecting the religious and cultural rules of the mosque; the camera was not permitted to film in front of the people praying, nor could it show their faces. Subsequently, a mechanical rig was constructed to film from above, at a constant speed from the entrance to the Mihrab in the main prayer hall and female prayer room (see fig.1) The pre-recorded footage of prayer was then projected back into both sites using the same automated device. The controlled motorisation of the projection re-traced the movement of the recorded image, giving the effect of only the frame moving through each physical space, constantly revealing and concealing the actual site below, temporarily dissolving the religious/social boundaries of the mosque (see fig.2).

In September 2019 Assembly moved to a new site; Old Kent Road Mosque renovated from a former pub in Southwark (see fig.3). Old Kent Road Mosque is due for demolition/redevelopment to build a new Islamic centre for the community. Assembly will perform both the main prayer hall and the female prayer hall before the building is demolished in late 2020. The female congregation at Old Kent Road Mosque have built a large, active community, organising many support groups and events. Their prayer space is of equal size and capacity to the main prayer hall directly above. An LCD monitor connects the two spaces as the imam is broadcast live in the female space (see fig.4). Identical rigs will be made in both spaces to reflect the unison of the two congregations via dual moving projections performing both prayer sites in synchronized time and space.

Interviews and research findings from Assembly are being used within a collaborative project led by architect Shahed Saleem and the V&A for the Architecture Biennale in 2020. This project will explore themes of immigration, hybridity and multi-culturalism through three Mosques in London; Brick Lane, Old Kent Road and Harrow. The findings have also been disseminated via the following conferences and journal articles.

Julie Marsh is an artist filmmaker, researcher and senior lecturer at the Centre for Research and Education in Arts and Media (CREAM), University of Westminster. Julie studied at London College of Communication, University of the Arts, London, completing a PhD in 2017.

Information about the full series:
https://sensingsite.blogspot.com/p/composting-estate-series-of-seminars.html