COMPOSTING ESTATE
A series of seminars examining processes and materials of composition and decomposition of site and place.
Museum and Study Collection
Central Saint Martins
10.30am  – 1.00pm
28 February 2020 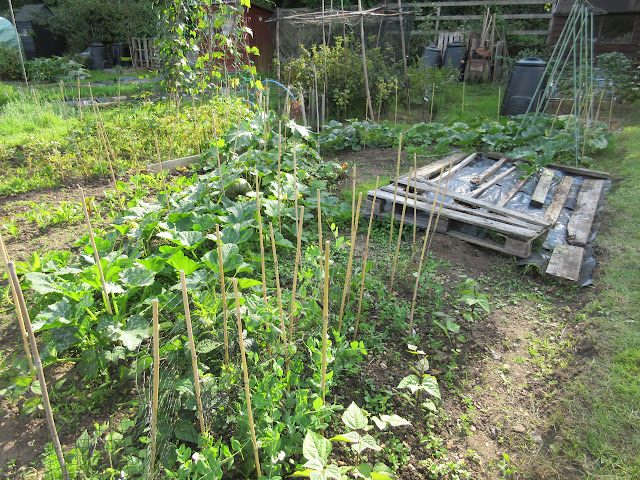 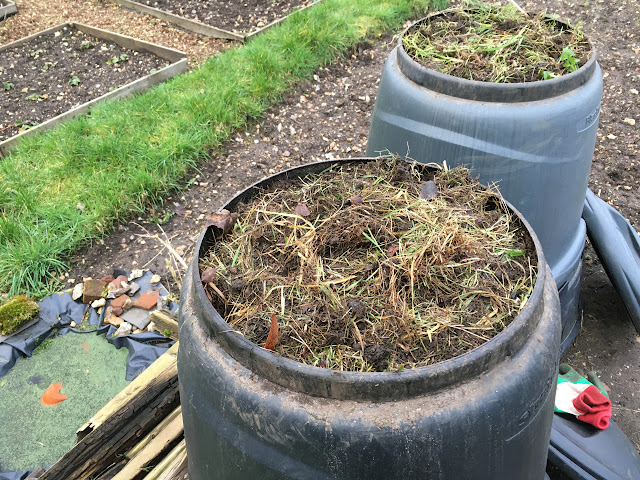 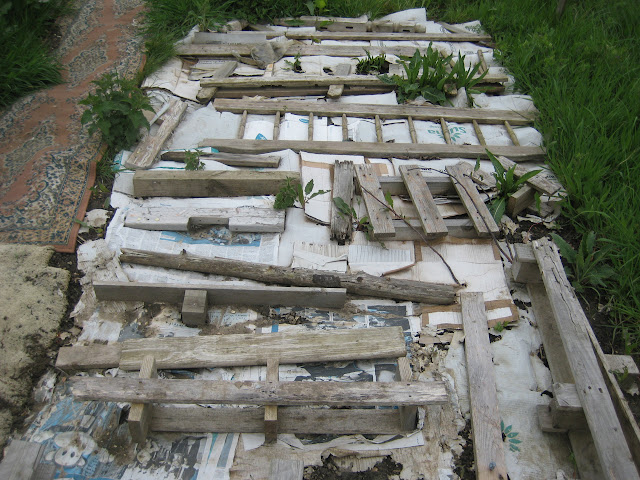 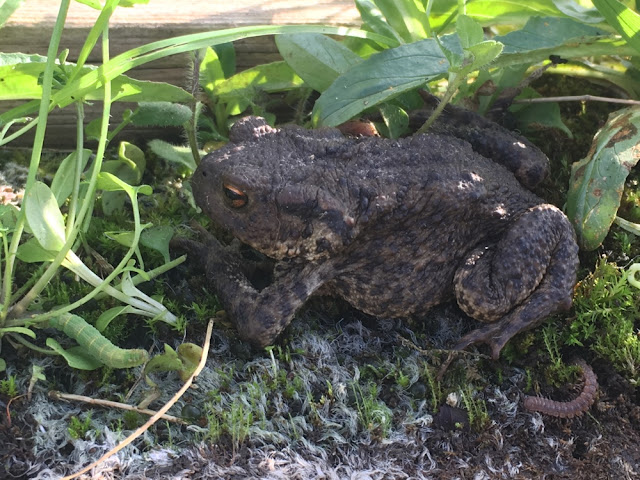 Meanwhile at the plot a continuation of the practice of toad ecology (hunting evidence of lizards, toads and frogs) exists. On unearthing the compost bins (do we) discover who or what lives in them? Is it just the non-human life forms or are we making new earth? The experience of working on site will be discussed with a re-digging.

In this presentation I discuss the use of allotment plots as art research study areas. Since completing my PhD titled “The Allotment Plot: Place Tilled - An investigation into plant material, rural labour and cultivation within art practice”, I have continued explorations of allotment plots as a theme in my practice. I investigate the Plot as site, which is subject to environmental occurrences, wildlife agents and human labour; through time all of these things merge, constructing and deconstructing the site.

In reference to Rancière’s ‘the key formula of the aesthetic regime of art is that art is an autonomous form of life’, (the aesthetic revolution and it's outcomes, 118), and Lippard’s and Kaprow’s essays affirming art can become life and life become art, the blurring of these concepts assists my methodology. The Plot activity is situated in everyday life interacting with human and non-human factors. The plot surface is worked and reworked similarly to painting a canvas or a continually adjusted installation. Plant matter is produced and productivity emerges. Actions and observations can be translated through drawings, images, film, installation and creative writing https://ellamontt.wordpress.com from the site to non-site gallery as exhibition.

Allotment Gardens are a social construct originating from the late 18th century, when significant increases in Land Enclosures, loss of work due to new machinery, the Industrial Revolution and European Wars, created food poverty and a need for dedicated land for the working class to cultivate plant-based food. In the 21st Century, land is often contested, so allotment work can still be seen as political activism. Allotment gardens and art in the UK are defined under a governmental taxonomy of leisure (and culture) rather than labour.
My first municipal allotment site, Plot 326, was in a wild state when I received it. The over growing nature of the place became part of my research. My art practice on the plots is mostly invisible to the observer. My processes include photographic images made in to film and arrangements of trees products, cardboard; newspaper and wood layered and rearranged, becoming habitats for wildlife agents. I study making new earth through composting plant-based material, unearthing compost bins and using the earth on the allotment plot influenced by the Harrison’s ‘Spoils’ Pile Reclamation’ (1976-78: ongoing) Art Park process.

Conversations during the presentation dig in to approaches to practice, exhibition translation, accessibility to audience, experience, encounter, limited and practicality of access and whether or not it is a social practice. I find the public is not always human. Questions are asked about the garden being productive for whom; is obtaining a yield, an extraction, or lettings things happen the productivity? Is it more important I cultivate the plot site for the toads to inhabit and encounter? There is no conclusion. Meanwhile translating the site and on going explorations will be developed for further non-site / gallery exhibitions and encounters. (Postscript: During lockdown I took part in Sensingsite zoom meeting 15/05/2020 from Plot 21).

Judy Price
The End of the Sentence 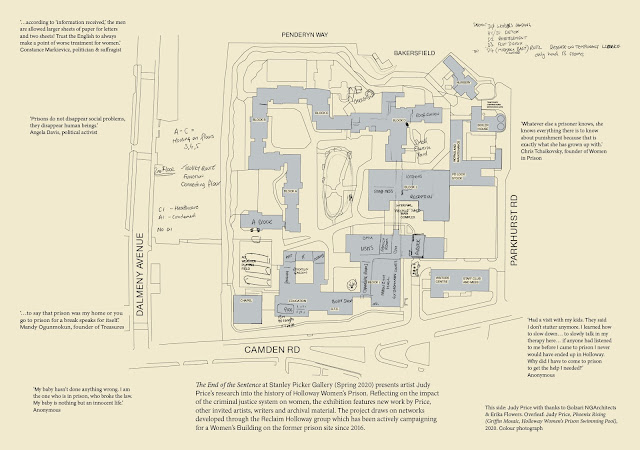 The End of the Sentence presents artist Judy Price’s research on Holloway Women’s Prison.   The work reflects on the impact of the criminal justice system on women and makes visible issues around gender, class, race and economy in the prison context and develops Price’s research-led practice, concerned with how artists can produce different ways of thinking about contested sites and engage with collective struggles.


Holloway Women’s Prison (1852-2016) was the largest women’s prison in Western Europe and the only women’s prison in London. Its prisoners “included some of the leading freedom fighters of our age, such as the suffragettes [and Greenham Common women], but the vast majority were always imprisoned because of poverty and injustice, addiction and abuse”.  The End of the Sentence draws on individual and collective stories of the prison, through the networks, collaborations and relationships Price had developed through the coalition group Reclaim Holloway , which has been actively campaigning for a Women’s Building on the former prison site since it was decommissioned in 2016. The Women’s Building will be a service hub helping vulnerable women stay out of the criminal justice system, a transformational space for the local community, and a positive legacy for the thousands of women held in Holloway prison over its 164-year history.

As part of The End of the Sentence, Price’s moving-image installation The Good Enough Mother explores the incarcerated pregnancy, drawing on transcriptions of 28 interviews by midwife Dr Laura Abbott, as well as the field work and writing of forensic psychotherapist Pamela Windham Stewart.   Co-scripted with artist and writer Andrew Conio the script  is re-voiced by actors from Clean Break, a women’s theatre company that uses theatre to keep the subject of women in prison on the cultural radar and whose members have lived experience of the criminal justice system.

Price’s photographic work draws on her time spent in the decommissioned Holloway prison building, which she lives directly behind, and the wealth of intimate objects from the prison held in the Islington Museum archives. Photographs of hair and a fire hose plug examine some of the less obvious traces of prison control – in the event of a fire in a cell at HMP Holloway, the small yellow plug was removed from the door and a hose inserted blasting water into the cell, before allowing the inmate to evacuate. Phoenix Rising is an image of the griffin mosaic on the base of the swimming pool installed in Holloway in the 1970s new redevelopment. Many of the incarcerated women referred to the griffin as a phoenix and it is in light of this and the recent campaign for a Women’s Building that Price embellishes the reading of the Griffin as a potential site of transformation.

Price is currently developing a long form film with support from the Stanley Picker Gallery, Arts Council England and the Elephant Trust.