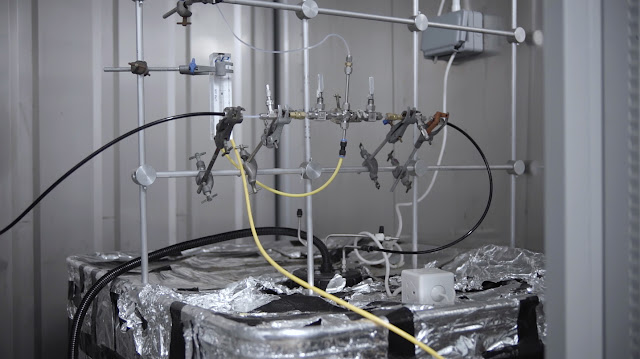 Join us for a special screening of Rehearsals for Uncertain Futures followed by a panel discussion with artists Matterlurgy (Helena Hunter & Mark Peter Wright) + special guests. The discussion will be followed by a screening from the latest edition of the UK Green Film Festival – Nikolaus Geyrhalter’s award winning documentary Earth.


REHEARSALS FOR UNCERTAIN FUTURES
A short film by Matterlurgy (Helena Hunter & Mark Peter Wright) about a Sea Ice Simulator (SIS) used in climate science to predict and model the impact of black carbon on ice reflectivity. Shot on location within SIS, a series of shipping containers situated in woodland, the work shifts between local ecologies of wildlife and fauna, to the technological manufacture of ice and the energy required to sustain such relations. The film focuses on the interconnections between the lab and field amplifying physical and material production practices behind climate simulation and predictive data modelling. How does data become data, where exactly is the field, what practices of maintenance and care does simulation require?


Commissioned by the Centre for the GeoHumanities at Royal Holloway, University of London as part of Creating Earth Futures. The work premiered in May 2019 at Raven Row Gallery, London.